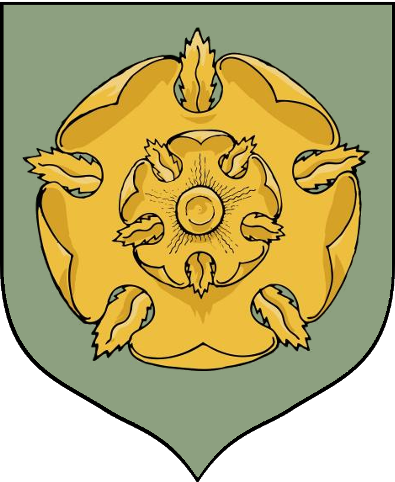 House Tyrell of Highgarden is one of the Great Houses of the Seven Kingdoms, overlords over the Reach. A large, wealthy house, its wealth is only surpassed among the Great Houses by House Lannister, and the Tyrells can field the greatest armies. Additionally, if they call the fleets of their bannermen the Redwynes, the lords of the Shield Islands, and the coastal lords, they can command a navy that equals if not surpasses the royal fleet.

Highgarden is an ancient seat of rule and the heart of chivalry in the Seven Kingdoms; the Tyrells style themselves ‘Defenders of the Marches’ and ‘High Marshals of the Reach’, and traditionally, they have been Wardens of the South. Their sigil is a golden rose on a green field, and their words are “Growing Strong.” Members of the family tend to have curly brown hair and brown or golden eyes.

The Tyrells trace their line of descent, through the female line, to the legendary Garth Greenhand, the first King of the Reach, in the Age of Heroes(indicating their origin among the Andal invaders thousands of years before). The Tyrells were stewards to House Gardener, the ancient ruling line of Kings of the Reach, who periodically intermarried with lower ranking houses of the Reach such as House Tyrell or House Florent. Following the defeat and death of King Mern IX, at the Field of Fire, Lord Harlen Tyrell, hereditary high steward of the Reach, surrendered Highgarden and was granted the castle along with dominion of the Reach by Aegon the Conqueror. As Wardens of the South they frequently warred with the Dornishmen, who remained independent.

Lady Olenna Redwyne, his mother. She is known as the ‘Queen of Thorns.’