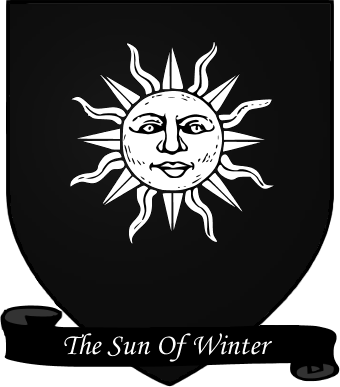 House Karstark of Karhold is a noble house from the North, and a cadet branch of the overlords, House Stark. Karstarks are big, fierce men, bearded and long-haired, and favor wearing cloaks made of the pelts of seals, bears, and wolves. Their blazon is a white sunburst on black and their motto is, “The Sun of Winter”.

The Karstarks are descendants of the First Men, and have the blood of the Starks of Winterfell in their veins from a thousand years before. Their founder was Karlon Stark, who put down a rebellion of the Boltons and was granted lands for his valor. The castle he built was named Karl’s Hold, but that soon became Karhold, and over the centuries the Karhold Starks became Karstarks. Karhold lies far to the northeast of Winterfell in the midst of a forest beyond the Last River, overlooking the Shivering Sea.

Alys Karstark, his daughter, Married to Sigorn, the Magnar of Thenn.

Arnolf Karstark, his uncle. Called “Lord Arnolf” despite being only the castellan of Karhold.