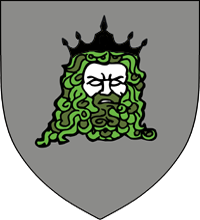 For centuries, the High King of the Isles had been chosen between the lords and captains of the Iron Islands in a kingsmoot. Five thousand years before the War of the Five Kings, Urron Greyiron descended with his axemen among the ironborn assembled on Nagga’s Bones, murdering all their opponents and proclaiming himself king.

He also made the position hereditary, so at his death the Seastone Chair passed to his heir instead of being chosen. His line ruled during a thousand years until it was extinguished by the Andals that came to the Iron Islands.